A lot of Flutter’s knowledge has been analyzed earlier in this series. In this article, let’s take a look at the relevant principles of Flutter platform communication. Flutter officially provides three platform and Dart message communication methods, they are MethodChannel, BasicMessageChannel, EventChannel, this article will continue the previous series to carry out an in-depth analysis of them, the source code depends on Flutter version 2.2.3, Platform chooses the familiar Android platform implementation.

The three official message communication methods of MethodChannel, BasicMessageChannel, and EventChannel are all full-duplex communication, so based on them, we can basically achieve various communication capabilities between Platform and Dart. Their respective applicable scenarios are as follows:

The basic usage of these communication methods will not be explained here. Here we will focus on the skills. There are two special points to pay attention to when writing Platform code:

In our daily work, we use MethodChannel the most, but it is not type-safe. In order to solve this problem, the official recommendation is to use the Pigeon package as a replacement for MethodChannel. It will generate code to send messages in a structured type-safe manner, but it is currently Not yet stable.

For more information about their basic use cases, please refer to the official document https://flutter.dev/docs/development/platform-integration/platform-channels

In the source code analysis below, we still adhere to the way of use as the entry point, which is divided into Platform, Engine, and Dart layers.

Let’s take a look at the source code of the members of MethodChannel, BasicMessageChannel and EventChannel on the Platform side respectively: 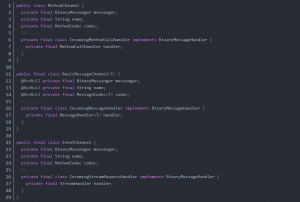 As you can see, no matter which method on the Platform side, they have three important members, namely:

The communication between the Platform and the Dart side above has been analyzed. Now the engine in the middle adhesive layer is called. The analysis of the Engine is still based on the calling sequence. Through the above analysis, we can get the following information: